Who is going to play optimus in Transformers 4?

Remember when Michael Bay was making Transformers 3, he made it no secret that he didn’t plan on returning for a fourth movie. But he came around to the idea, and now he’s explaining why he changed his mind and will be back for Transformers 4 with this statement..

“I thought I was done,” he tells The Huffington Post. “Then the ride came out [at Universal Studios Hollywood] and the two-and-a-half-hour lines. And then you’re thinking, Oh my God, someone’s going to take this over. And you start doing a lot of soul-searching. Like, OK, I’m about to do a little movie, Pain & Gain … and the studio says they want to restart the franchise. And someone could come in here and screw it up, you know? So I’m thinking that if I do this last one, we set it on a new footing, we change a lot of things — but we keep the history of the three in place. But we broaden it so it can be set up and be carried on — it would have a better chance for survival, I guess. You know?”

“We’re basically taking from the history of where it was — or where we left it in Chicago,” he explains. “And we’re going to carry it on from there.” 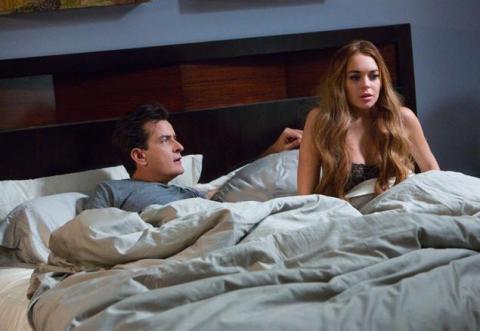 This screen shot, could spell the end of the world as we know it! Charlie Sheen and Lindsey Lohan in bed together!? Dimension Films released the first image Thursday of the two gossip-mag favorites from their cameo in the upcoming parody “Scary Movie 5.”

Zucker co-wrote the script for “Scary Movie 5,” but “Undercover Brother” director Malcolm Lee is taking over this time around. Look for the movie  hitting theaters on April 19.